Moon bear Maggie’s nine years in sanctuary sadly ended last month as a sudden onset of peritonitis took her life.
The alarm was raised when Maggie began to show signs of lethargy and an emergency health check revealed a severe inflammatory process was occurring. Exploratory surgery found the cause was excess fluid in her abdomen which was infected, a condition known as peritonitis.
Despite emergency surgery and medical intervention, the disease progressed and a hole developed in Maggie’s stomach from which she could not recover.
Four days after the first signs of illness, Maggie was laid to rest in the sanctuary cemetery.
Senior Veterinary Surgeon Shaun Thomson said:
“Everyone at the sanctuary is absolutely shocked and distraught at the sudden passing of our dear friend Maggie. Moon bears are notoriously stoic and spotting signs of distress can be difficult, but as soon as there was a hint of an issue the team reacted and everything was done to help Maggie pull through. Sadly, there was no way to stop the sudden and rapid progression of illness and now Maggie will spend every night out under the stars as should have always been her birthright.”
Maggie arrived at Animals Asia’s Vietnam Bear Rescue Centre in 2009 as a tiny cub, having been rescued from a bear bile farm.
As an adult, she was affectionately called “Lady Maggie” for her graceful nature. She was known for her love of hessian sacks which she would often wear on her head and was instantly recognisable for her eye-catching crescent.
As an adolescent she was responsible for a change of sanctuary safety procedures after mischievously overcoming the bamboo protectors and climbing the highest tree in her enclosure. Thankfully she returned to the ground unharmed and on the correct side of the enclosure fence. 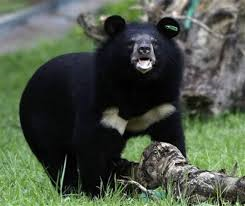 Animals Asia Founder and CEO, Jill Robinson MBE said:
“We knew Maggie almost her whole life. From a defenceless cub, she grew up with us into the beautiful, contented, happy, young adult we so dearly loved. We knew one day she would leave us, but nobody thought it would be so soon. We’re absolutely heartbroken but take solace from the knowledge that from the moment she arrived in sanctuary she knew only friendship, love and happiness.” 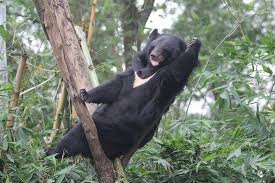 Maggie was rescued alongside her brother Angus who she lived with at the sanctuary.
Maggie was named after American-Vietnamese actress Maggie Q, who was moved by the plight of the bears during a visit to the sanctuary. A bond developed between them which saw Maggie Q championing her namesake and supporting Animals Asia’s campaign to end bear bile farming in Vietnam. 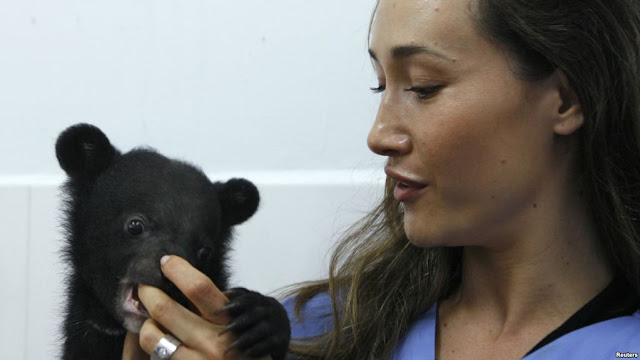 Following the news of moon bear Maggie’s passing, Maggie Q said:
“I met Maggie the bear on arrival as a young baby to the sanctuary in Vietnam. I remember barely being able to contain my excitement after hearing she had been saved. She would grow to maturity without the pain of life on a bile farm and be able to start the road to recovery after losing her mother. What a massive gift, and a new beginning.
“I can say with absolute certainty that holding Maggie the day we met was one of the most touching moments of my life. I needed to suppress happy tears by the minute with these little miracles!  All around me were the people responsible for cementing their future and I couldn’t help but feel such a profound gratitude for their life’s work.
“I want to express my deepest condolences to the team at Animals Asia for their hard work and dedication to the lives who depend on them. In a time of loss, sadness is expected, but I offer also the word transformation. I know for me, I have been most affected in my life by those who have come in for a season. It seems that the way Maggie lit up our lives, she provided a particular joy and hope that only she could. Because of the collective commitment of staff, volunteers, and donors – she was able to live that spirit and motivate our hearts to keep fighting.
“Maggie the Bear, thank you for your time with us, and for touching our lives they way you did. Your season of giving on earth has come to an end, but your spirit endures in our hearts forever. We love you, naughty bear.” 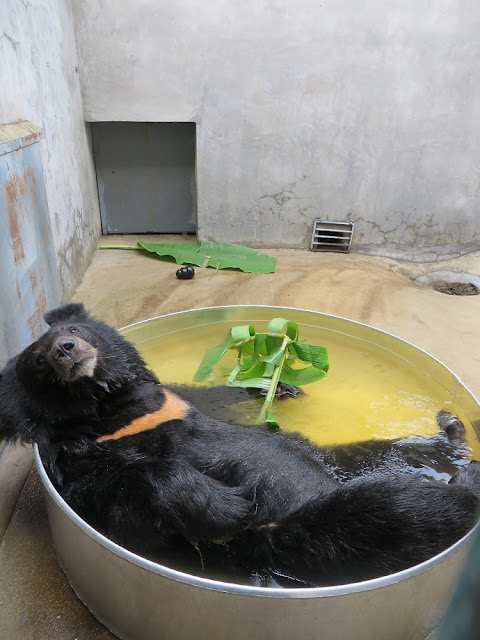 Bear Team Supervisor, Hoang VanChien, who looked after moon bear Maggie, said:
“Being ripped from her mother too early, Maggie hardly had a chance to enjoy the joys of her mother's care. But the sanctuary became her second home – the warmest place in the world where love and trust flourished despite all she went through.
“She was a gentle, beautiful girl. It is so sad that she has left this world forever and left all her friends heartbroken. May she find peace, happiness and lots of jam in another world where there is no more sickness and disease.”